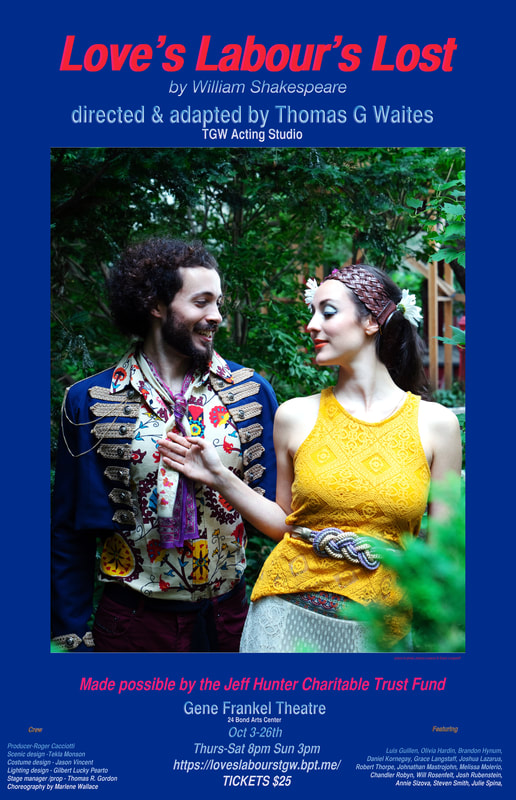 Oct. 3 - 26
at
The Gene Frankel Theatre | 24 Bond Street, NYC 10012
OPENING SET FOR SUNDAY, OCTOBER 6
​Echoing the sentiments of the world’s greatest rock concert on its 50th anniversary, Thomas G. Waites transports the tenderness and philanthropy of LOVE’S LABOUR’S LOST to the era of enlightened love and transformative music. Presented with the generous support of The Jeff Hunter Charitable Trust, a cast brimming with emerging New York talent will bring the timeless verse of Shakespeare and enduring music of Woodstock to the Gene Frankel Theatre (24 Bond Street, between Lafayette and Bowery) for a limited engagement from October 3-26. Opening night is Sunday, October 6. Tickets, priced at $25 for general admission and $15 for students and seniors.
Buy Tickets Here
Conspicuously poetic and teeming with flirtatious word play, Shakespeare’s frolicking love story LOVE’S LABOUR’S LOST moves to the summer of Woodstock, celebrating the romance and togetherness inherent in both. Just as the King of Navarre and his three cohorts sequester themselves and swear off women with a three-year vow of chastity, four remarkably beautiful women arrive as emissaries from France to meet with the King. Their plan derailed from the start, the men decide that divinity is, in fact, only found in the eye of a woman and love the only worthy study of mankind. Interspersed with the hits of the era from The Doors, Jackson Browne, Jesse Colin Young, and more—performed live by the cast—this LOVE’S LABOUR’S LOST seamlessly blends Shakespeare’s immortal words with the unforgettable tunes that inspired a generation to live with love.​
​This production of LOVE’S LABOUR’S LOST carries on the legacy of Jeff Hunter, veteran agent and fierce advocate for undiscovered talent, who passed away in early 2018. The co-founder of Triad Artists and former Senior Vice President of Motion Picture Talent at William Morris Endeavor worked with an impressive roster of clients in both theatre and film during the span of his storied career, including Barbra Streisand, Whoopi Goldberg, Nathan Lane, Patti LuPone, and Raul Esparza, among many others. He is credited with discovering top tier talent at the beginning of their career, including Kevin Kline, Raul Julia, Mandy Patinkin, and, perhaps most notably, Morgan Freeman, with whom he formed one of the longest running actor-agent relationships in the business at more than 40 years of representation. Through funding projects like LOVE’S LABOUR’S LOST, The Jeff Hunter Charitable Trust aims to provide performance opportunities for early career talent that act as a springboard for them to acquire representation and jump start their careers.
​The cast of LOVE’S LABOUR’S LOST features Luis Guillen, Olivia Hardin, Brandon Hynum, Daniel Kornegay, Grace Langstaff, Joshua Lazarus, Robert Thorpe, Johnathan Mastrojohn, Melissa Molerio, Chandler Robyn, Will Rosenfelt, Josh Rubenstein, Annie Sizova, Steven Smith, and Julie Spina
LOVE’S LABOUR’S LOST is adapted and directed by Thomas G. Waites. Set design is by Tekla Monson; costume design is by Jason Vincent; lighting design is by Gilbert Pearto; and props design is by Thomas R. Gordon, also serving as Stage Manager. Roger Cacciotti produces.
Thomas G. Waites (Director) is an actor, director, and acting instructor originally from Philadelphia. He is a graduate of the Drama Division of The Juilliard School, where he studied alongside Robin Williams, Christopher Reeve, Frances Conroy and others. His acting credits span both stage and screen, earning acclaim early on in the 1978 film “On the Yard” opposite John Heard. Waites has a long history with Al Pacino, beginning with the Norman Jewison film “…And Justice for All,” followed by Richard III on Broadway and an Off-Broadway revival of American Buffalo. His additional stage credits include the original casts of Forty-Deuce, Trafford Tanzi, Pastorale, and Search and Destroy, as well as revivals of two Clifford Odets plays--Paradise Lost (opposite Geraldine Page) and Awake and Sing! (with Frances McDormand and Harry Hamlin). Additional film credits include Light of Day (with Michael J. Fox and Joan Jett) and Gangland, as the notorious Al Capone. Waites has made numerous television appearances, including guest spots on NYPD Blue, Buffy the Vampire Slayer, Law & Order (original and Criminal Intent); recurring roles on the soap operas All My Children and One Life to Live; and four seasons as Henry Stanton on HBO’s Oz. He founded the TGW Acting Studio in 2000, which was named the top school for acting study in New York City by Backstage in 2015, and continues to thrive today.
Sponsored by the Jeff Hunter Charitable Trust Fund. Discover the new young talents of tomorrow, today.