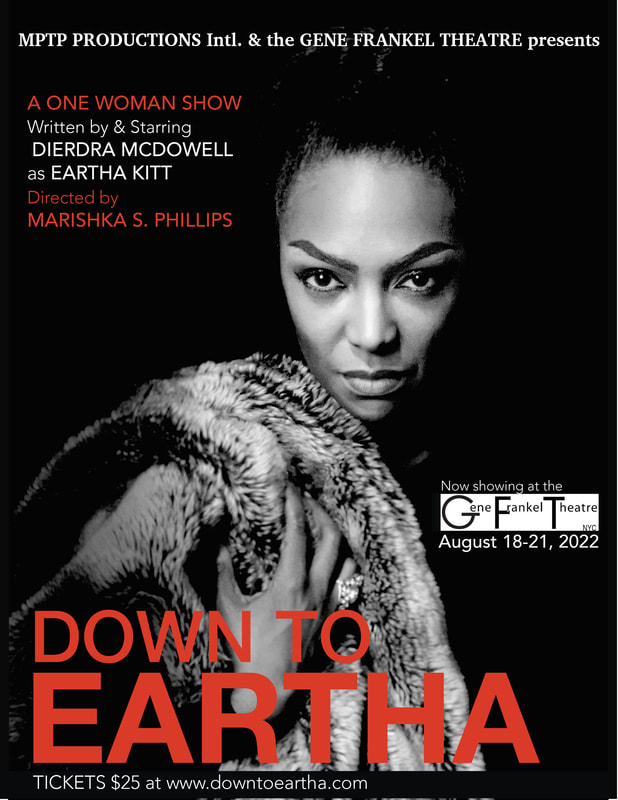 A one woman show written and performed by Dierdra McDowell as Eartha Kitt and directed by Marishka S. Phillips
Down to Eartha gives you an intimate look at that fateful day in 1968 when entertainer/activist Eartha Kitt attended a luncheon at the White House with Lady Bird Johnson, and then was blacklisted for a decade after speaking out against the Vietnam War. Through Eartha´s introspection and journey back to her own power and freedom, we learn that a woman´s freedom of speech should never be compromised!
Review: Jed Ryan, Lavender After Dark Media
" Written and performed by award-winning artist Dierdra McDowell and directed by Marishka S. Phillips, the extraordinary one-woman show Down To Eartha opens with gorgeously shot footage of McDowell recreating Eartha Kitt’s performance of Monotonous from the 1954 film New Faces. Featuring a simple set of McDowell seductively moving between three chaise lounges, it is indeed a faithful re-enactment– right on down to the intense lighting and bright colors of the films of that era. But that’s just the beginning… Throughout Down To Eartha, it’s no less than astonishing how McDonnell channels Eartha Kitt– not just with her looks and with her voice, but also with the fluid choreography of her movement. It’s a safe bet that anyone coming to see Down To Eartha is already a fan of Ms. Kitt (Like me!). But even younger audiences who may have never seen any footage of the real Eartha Kitt on TV or in movies will quickly learn from the opening of this show alone why Kitt was such a captivating performer.
Buy Tickets Here