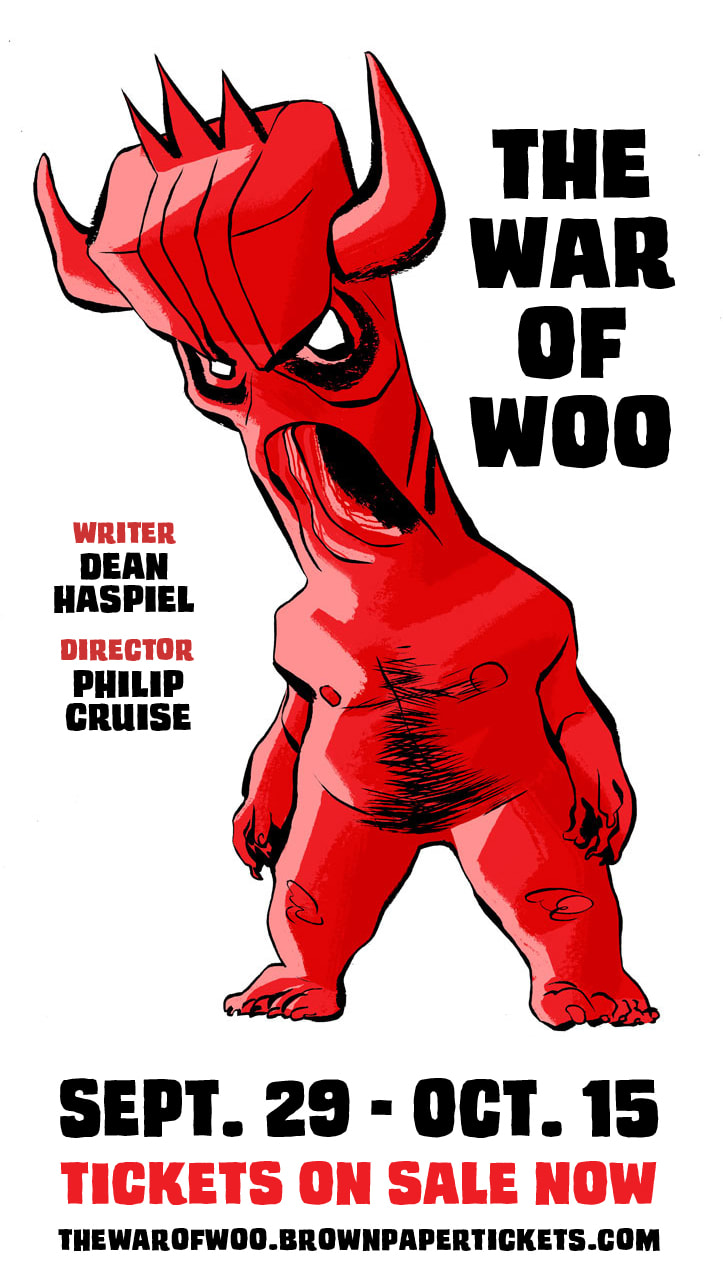 In THE WAR OF WOO, a Demon recruits a quartet of New Yorkers to help kidnap Satan in hopes of brokering a treaty with God to merge Heaven and Hell. Can a rebellious actor, a brazen assistant director and two best friends on the brink of breaking up ally long enough to alter the afterlife?

Says Haspiel: "A global pandemic may have postponed THE WAR OF WOO for over two years, but even a deadly virus couldn't snuff my play about the complicated, violent, and passionate relationship between Hollywood, Heaven, and Hell.”

“It's provocative and profane,” says Gilliam. “It's gonna be an hour and a half of gut-punch entertainment.”

Lighting, sound and props for the production will be managed by Gemini CollisionWorks, the creative team of Ian W. Hill and Berit Johnson. Set design and construction will be led by Joe Kay, with costumes by Holly Pocket McCaffrey.

"Seth, Dean, Ed and I have been friends and colleagues since we met as teenagers at SUNY Purchase,” says Cruise. “When the cast has such a deep understanding of the author’s material, the possibility for fireworks onstage is increased exponentially.”
PRELUDE TO THE WAR OF WOO is a cinematic prequel to the play, written by Dean Haspiel. The short film stars Seth Gilliam and Philip Cruise and was directed, edited and produced by Shannon Goldman at Super G Films.

Prelude to The War of Woo from SUPER G FILMS on Vimeo.

Emmy Award and Ringo Award winner Dean Haspiel is best known for creating characters The Red Hook and Billy Dogma and illustrating for HBO's Bored To Death. He has written and drawn comics for Marvel, DC, Image, Archie, Webtoon and other major publishers, and his acclaimed collaborations include work with Harvey Pekar, Jonathan Ames and Stan Lee. In addition, he is a Yaddo fellow, a webcomics pioneer, and emerging filmmaker. Haspiel’s previous plays include SWITCH TO KILL, HARAKIRI KANE, and THE LAST BAR AT THE END OF THE WORLD.

Philip Cruise is a New York-based actor, writer and director who formed Thin Duke Productions in 2003. His directorial credits include the political comedy KING GEORGE II and Tom Ellis’ BRIGHT DAY, and he currently serves as a technical director for the Brooklyn Children’s Theatre. An accomplished actor, Cruise's recent stage credits include George Gemini in Haspiel's HARAKIRI KANE and Hugh Hefner in Kallan Dana's PLAYDATE.