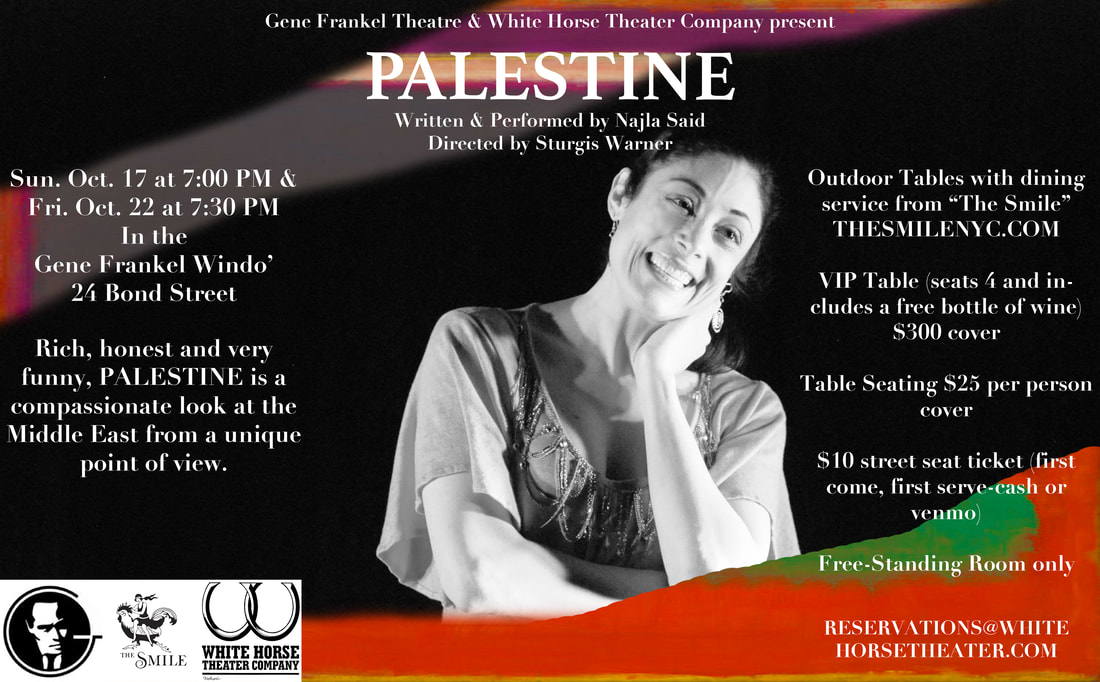 "Rich, honest and very funny, PALESTINE is a compassionate look at the Middle East from a unique point of view."

Outdoor Tables with dining service from The Smile
The Smile
VIP Table (Seats 4 and includes a free bottle of wine) $300 Cover
Table Seating $25 per person cover
reservations@whitehorsetheater.com
$10 Street Seats (First Come, First Serve - Cash or Venmo)
Free - Standing Room only
Gene Frankel Theatre and White Horse Theater
Company will present an intimate production of PALESTINE written & performed by Najla Said in
the window of the Gene Frankel Theatre. In their effort to offer a “Windo to the soul” the two
companies have partnered to create a “Windo” performance series focused on personal journeys
of self-reflection. PALESTINE, which enjoyed a sold-out Off-Broadway run produced by Twilight
Theater Company in association with New York Theater Workshop at The Fourth Street Theater
in 2010, will play Sunday, Oct. 17th at 7pm in a special engagement in The Windo’ of the Gene
Frankle Theatre at 24 Bond Street, NYC. The audience will watch the performance at seats and
tables in the street outside the theater. The Smile Restaurant next door will offer dining service at
outdoor tables. The production is directed by Sturgis Warner a long-time New York actor and
director specializing in new plays and new play development.
​
In PALESTINE, Najla Said provides a unique passage into one of the most volatile and historic
corners of the earth. With compassion, humor, and honesty she makes a case for Palestinian and
Arab points of view in ways that truly allow them to be heard. Raised in privilege on New York
City's Upper West Side (where many of her best friends were Jewish) Najla was forced as a
teenager to take a family trip to the Middle East to visit her father's homeland. Anorexic and
depressed, obsessed with boys and the beach, her experiences nevertheless kindled a life-long
exploration of what it means to be both Arab and American. Najla takes audiences on a
whirlwind tour from kissing Jewish boys to "the stench of Gaza," through two wars, the horrors
of 9/11, encounters with world figures including Yasser Arafat, and life with her beloved
father. Edward Said was a professor at Columbia University and, until his death in 2003, a
worldwide spokesman for Palestine and the Middle East.
​Najla Said has performed Off-Broadway, regionally and internationally, as well as in film and television. She is one of New York Theatre Workshop’s “Usual Suspects,” and has worked at the Public, The Cherry Lane, New Dramatists, The Lark, and Second Stage. In 2010 she was named one of “Forty Feminists Under Forty” by The Feminist Press. Since her Off-Broadway run ended, Najla has performed Palestine in over 25 high schools, colleges, and universities around the country and the world. In 2013 her memoir, Looking for Palestine, an expansion of her play, was published by Riverhead, a division of Penguin Books. In 2012, she collaborated with Vanessa Redgrave on "A World I Loved," based on her grandmother's memoir, which premiered at The Brighton Festival in the UK, and The Miller Theatre in collaboration with The Public Theatre in New York. In the spring of 2014 Najla's play The Assumption of Mary was featured as one of the 48 plays in The Mysteries at The Flea Theatre. In October 2016, her libretto for Mahmoud Fairouz's Oratorio, "Zabur" was performed at Carnegie Hall, and in 2018 the composer David Robert Coleman used some of the text from “Palestine” to create a musical piece that was performed by the West Eastern Divan Orchestra, conducted by Maestro Daniel Barenboim, on their European tour. The piece premiered in Aarhus, Denmark, and was also performed at the BBC Proms at the Royal Albert Hall in London, and the Salzburg and Lucerne Festivals.
Gene Frankel was the force behind the organization which has been an incubator for new works and actors since 1949. Frankel was also ( one of) the founder(s) of the Mercer Arts Center in Soho, along with Viveca Lindfors, Rip Torn, Steina and Woedy Vasulka, and several others.) The building at 24 Bond—the Gene Frankel Theatre location since 1989—has been a center for independent thinkers in the New York City arts scene since the late 60s. The space housed Sam Rivers’ avant-garde jazz loft Studio Rivbea. Robert Mapplethorpe kept his studio on the fifth floor until his death in 1989. In 2008, the New York City Landmarks Preservation Commission recognized Bond Street as a historic district. Gail Thacker—who was Gene Frankel’s assistant—has resisted the gentrification that has transformed the area in recent years. Serving as the GFT’s artistic director she has created a stage in the theatre’s window for new adventures in theatre and performance art.
​Incorporated in 2003, White Horse Theater Company is a not-for-profit organization dedicated to producing and developing American plays. They seek to investigate and celebrate American culture by re-examining American classics and nurturing new American voices. They aim to champion great American playwrights by revitalizing their masterworks and shedding new light on their seldom-produced works. They strive to support emerging American playwrights by offering them developmental readings, labs and workshops. White Horse is committed to making high-quality theater and aims to share their passion for American plays and playwrights with their fellow artists and audiences.