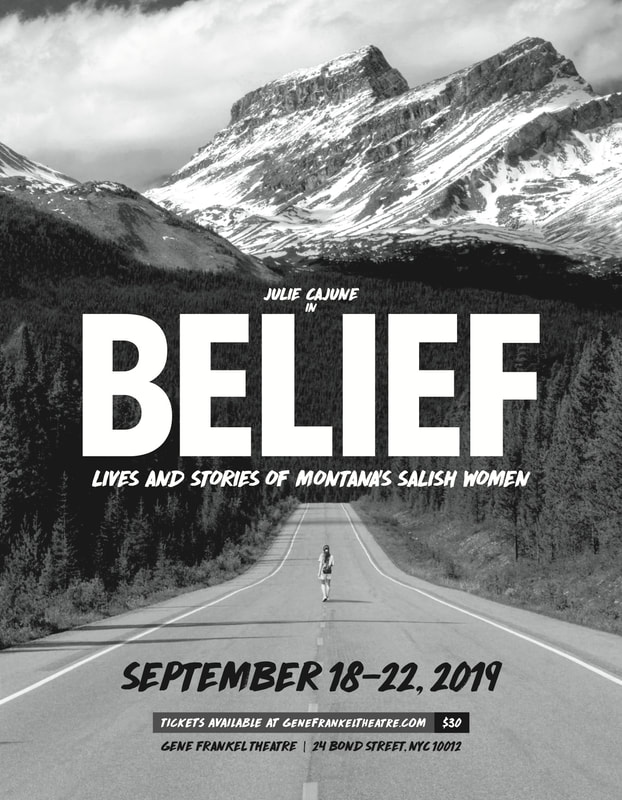 Julie Cajune in
Belief: Lives and Stories of Montana's Salish

The play draws from Cajune’s personal life experiences and the true stories of generations of the women in her family living on the Flathead Indian Reservation in Northwest Montana. The stories told in BELIEF present a rare opportunity for audiences to participate in a genuine cultural exchange, and to gain insight into the daily lives of people in a Native American community as they grapple with the human condition, as well as with the broader historical legacies and events of our time. Cajune’s mixed heritage is a direct consequence of these historic events. “I am the sum of many stories from many places. My mother was Salish, Nez Perce, Scots and Irish. My father was Chippewa and French. These different stories and places all occupy memory and space inside of me, but the largest part of my identity is Salish and it is my Salish homeland that holds my affection. It is where I grew up and live today.”

BELIEF originated seven years ago as an idea to weave music, story, and poetry to portray the lived experiences of Native women through theatre. The play was written by Cajune and poet Jennifer Finley, and is directed by Linda Grinde.

“When Julie came to me with the idea for an evening of theatre, she had no intention of telling personal stories,” says Grinde. “I explained how a theatre piece might be shaped and suggested that we collect the stories she wanted to use and allow a theme to emerge. So Julie brought me stories and told me stories too. She would say, ‘That reminds me of something my Aunt Florence did,’ or ‘That happened to me as a child.’ Every once in a while I would say, ‘Write that one down.’ She protested that she wasn’t a writer but then she would show up at the next meeting with a well-crafted essay and a big smile.” And then Jennifer would write these amazing poems that connected to themes or drew out something powerful, unspoken between the lines.

Adds Cajune, “At the end of the summer we laid all of the narratives and poems on the table. The words were secular and sacred, sorrowful and hopeful. Linda then selected and arranged the pieces and original music into a theatrical structure until she sensed the arc of a storyline; a message that said that what is most powerful in our lives is often what we cannot see. We called it BELIEF—the human experience of belief in self, in life and in love. We felt these individual women’s voices offered connections to our shared humanity and could lead us to see that perhaps what connects us is more powerful than what divides us.”

The play premiered in December 2012 at the Bigfork Center for the Performing Arts in Montana, and went on to Missoula, Bozeman, and Dillon in the state before moving across the oceans to Hawaii, Spain and, in 2016, Scotland, where the historic connection between the Highland Clans and the Native people of Montana came full circle. “We thought BELIEF had run its course,” says Cajune. “But life has many surprises.”

BELIEF is a play with much to say about today’s world. “We enter this world wired for story,” says Cajune. “From childhood and throughout our life, story is the filter we use to make meaning—to understand who we are. Story informs our identity and our place in the world. Story characterizes our relationship with our self, with others, and with the world. Daily we rely on story to communicate the profound, the humorous, the mundane and the exotic episodes of our lives.

“The challenge before humankind today,” she adds, “is to find or build the bridge that connects us with one another and with the natural world. Indeed the two great crises of our generation are the failed relationship among us and the failed relationship with this beautiful world that gives us life each day. These challenges demand that which story nurtures: imagination, compassion, creativity and connection. Stories can embolden the heroes, the healers, the dreamers, the bridge builders and the truth tellers that we need at this moment.”

BELIEF features an original music score created by pianist David Lanz, flutist Gary Stroutsos and violinist Swil Kanim. When performed in Scotland with the musicians on hand, some of the original music score was played from a recording, but local musicians Hector MacInness and Leighton Jones performed much of the music live, selecting both traditional and original pieces to complement the narratives. “As I am an ‘Indian McDonald,’” says Cajune, “it seemed fitting to connect the music with my stories and the women in my family who share the same heritage.”
​About the Participants

Julie Cajune is a Salish educator who has been named “one of the 50 visionaries who are changing your world” by Utne Reader magazine. She was the creative force behind the audio and visual projects Remembering the Songs: Music Traditions from the Zuni, Navajo, and Salish and Heart of the Bitterroot: Voices of Salish and Pend d’Oreille Women. Cajune has dedicated herself to teaching accurate history of America’s Indians, challenging myth and stereotype along with the absence of authentic information about American Indian people.

Jennifer Finley is an award-winning poet and journalist who has also become a playwright. She has authored two books of poetry and one children’s book. Her first collection of poems won the North American Native Author’s First Book award for poetry. She is Salish and Chippewa-Cree and is an enrolled member of the Confederated Salish and Kootenai Tribes.

Linda Grinde has served as theatre consultant for a plan to create an indigenous theatre festival on the Flathead Indian Reservation. She directed the premiere production Moon Over Mission Dam, and directed four readings for the first Native American Playwright’s Festival in Arlee, Montana. Grinde has also directed the recent production of The Foreigner for the Whitefish
Theatre Company.

David Lanz is a Grammy-nominated pianist who has enthralled music lovers around the world for decades with his engaging playing style and original compositions. A top instrumental recording and concert artist, he has reached worldwide prominence with his number one Billboard hit, “Cristofori’s Dream.”

Gary Stroutsos performs world flute music drawn from many traditional cultures, creating odysseys of sound with the world of nature. Evoking a spirit of place and the voices of the land, his work includes internationally acclaimed recordings at sacred sites, using the unique acoustics and history of each great space as the starting point for musical exploration.

Swil Kanim, a member of the Lummi Nation, is a classically trained violinist, native storyteller and actor. Because of his unique ability to inspire audiences to express themselves honorably, he is a sought-after keynote speaker for conferences, workshops, school assemblies, and rehabilitation centers. His workshops, The Elements of Honor, are attended by people from all walks of life.

In New York City Julie will be joined on stage by Gary Stroutsos. For more information, contact
juliecajune@gmail.com.